Delicious and easy porcupine meatballs that take minutes to make and cook in your crockpot. Little prep and impressive results!


So far every single Valentine’s Day the husband has cooked dinner for him and I. This is a really big deal for him, because he really doesn’t cook besides the occasional freezer meal (he says those count), spaghetti + spaghetti sauce, and assembling a sandwich. Oh, he’d also be upset if I didn’t mention pouring a bowl of cereal — that definitely counts as a meal…according to him.

I’ve told the story when we were dating once and he passed a gourmet meal off as his own. Later I found out that after a failed attempt, he frantically had gone over to his sister’s apartment and she made it for him. But for me, it’s totally the thought that counts.

We love to go out to eat, but Valentine’s we like to skip the crowds and do a dinner at home just the two of us. Although, admittedly Grey has been a visitor for our Valentine’s dinners because well, we are kind of bad at the whole getting a babysitter thing. And I think this year will probably be the same, but we love him too so why not let him be our Valentine and share in dad’s impressive once-a-year gourmet meal. However, next year when we are living close to his aunt’s I imagine one of them will be getting a call to babysit. 🙂

These are one of my all time favorite meals from growing up. So I’ve modified one of my favorite meals ever (as a kid) and cooked it in the slow cooker instead. There is NO porcupine in these, but they get the name because you stuff rice in the meatballs and they end up looking a little bit like a porcupine when they are finished cooking. 🙂

These are so simple to throw together and after slow cooking for most of the day you won’t believe how flavorful and tender these are! Enjoy!

Delicious and easy porcupine meatballs that take minutes to make and cook in your crockpot. Little prep and impressive results! 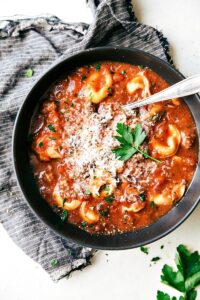