The babe’s 2nd birthday was earlier this week but we’re celebrating this weekend and I *think* he understands what’s going to happen based off of his brother’s recent birthday. I’ve told him a few times it’s almost his birthday and he literally squeals and yells, “YES!” When I ask him if he wants chocolate cake he gives another emphatic “YES!” Annnnnd the same if I ask him if he wants a vanilla cake. So, maybe I’ll nix both flavors and just make a pumpkin carrot cake because the whole family is obsessed with that!

The one thing I know for sure? The “theme” of his party will be puppies. I’ve never seen such a little kid SO obsessed with animals; he goes crazy around just about any animal, but especially around puppies. His grandma has the cutest little puppy that I’m certain is his best friend (after me of course ;)).

Our little animal lover babe even gets concerned about his own stuffed animals. He has no short of a dozen little animals (everyone’s go-to gift to him!) and the other day he had me cut off every attached single tag, string, or blemish on each of his animals. He wouldn’t let me do a thing until they were free of anything & everything he deemed to be bugging the animals (or him…!)

He also thinks his animals need milk and food, so he’ll “feed” them resulting in no short of a ridiculous amount of messes. Usually whatever we make him for breakfast, lunch, and dinner also gets fed to whatever animal(s) he’s lugging around at the time.

As much as he loves his animals though, he would NOT part with the carrots or the red potatoes from this dinner. Not one of his animals got a single bite of those ? Now the broccoli, well, that’s a different story… And for the record, his stuffed animals had no part in eating that broccoli either…

This sheet pan dinner has become one of our new favorites and it’s perfect for the cooler weather with the heartier root veggies. Lucky for me, my husband hates onions, so I get a double helping of them and they are actually my favorite part of this dinner! They get slightly caramelized and are so full of flavor! At the end of the baking time, you’ll broil the sheet pan on high for a couple of minutes which gives all the veggies and the chicken a nice char.

Not only is this dinner made on one pan, but the same seasoning mix is used three times. You’ll toss it first with the chicken (and let it marinate for a little bit while you prep everything else), next with the first set of veggies that get baked, and finally with the broccoli. Even with a bit of veggie prep, this dish really doesn’t take too long to prep because you aren’t dicing anything — quick and coarse chops for the most part 🙂

The cook time of this dish is staggered to ensure each of the veggies are at optimal tenderness and the chicken doesn’t get overcooked. The first batch of veggies are cooked for 20 minutes and then you’ll add the broccoli and the chicken to the sheet pan and finish cooking. It’s such an easy dinner to make and one the whole family will enjoy! OR if you want to keep this all for yourself (and trust me, I do not blame you!) it makes a great, super healthy meal prep option! 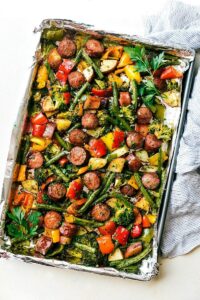 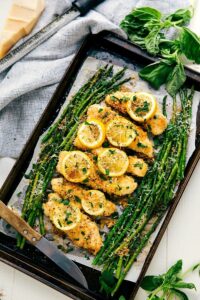 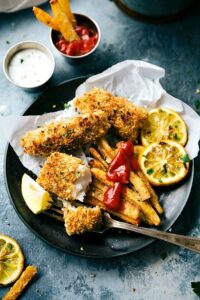