A one-pot meal – cheesy macaroni noodles with lean ground beef and plenty of BBQ sauce. A simple, budget-friendly dinner your family will love and is ready in under thirty minutes! 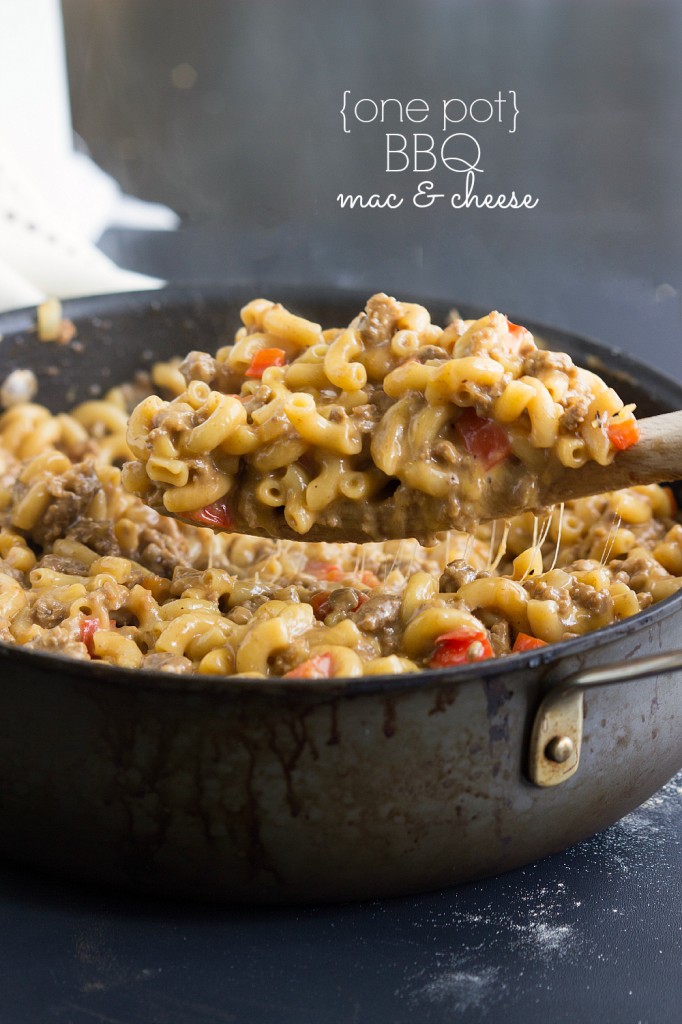 You all know about my obsession with one-pot meals right?

One-pot meals are easy and quick, PLUS only one dish to clean!

So what are in for with this meal? A whole ton of cheesy, and sweet BBQ flavor. And this post? Lots of step-by-step picture action/substitution ideas to make sure this meal is as easy for you as it was for me to make. This is such a great and easy summer dinner to make. When it’s warm outside and the weather is great, I am always excited to have a quick dinner ready so I can be outside as much as possible. 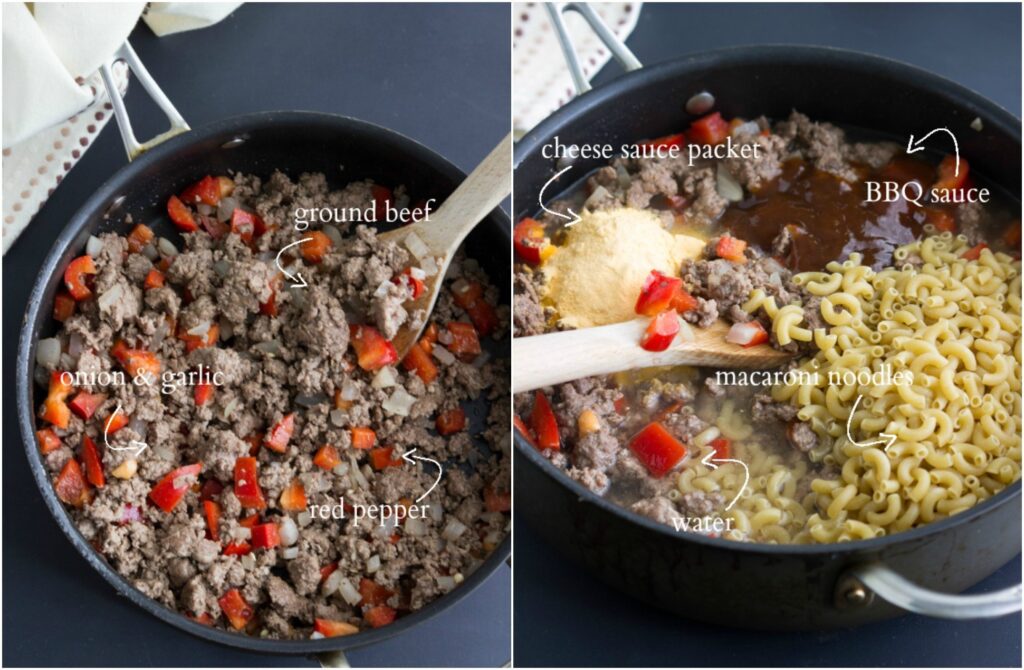 Starting with ground beef. I used extra lean, you could also try ground turkey. Cook that up on a skillet with some onions, garlic, and red pepper. I pretty much throw peppers in everything, but it’s completely optional for this dish. Or you could think of another veggie you would want mixed in. <–I try to sneak some veggies into just about everything.

Once the ground beef is cooked through, drain any fat and then return the pot to the stove. Add in two packages of Mac and Cheese, one cheese packet, three cups water, and 1/2 cup BBQ sauce. 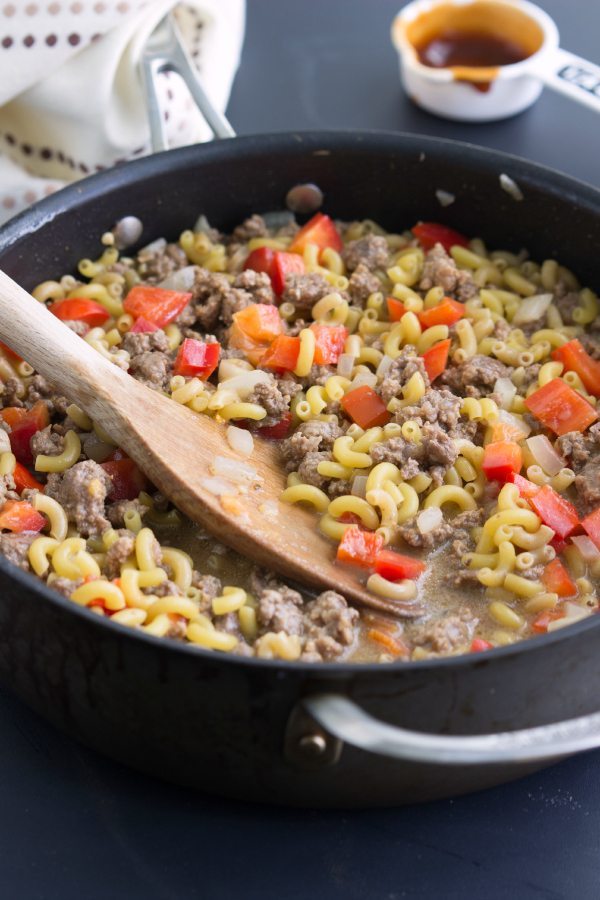 Give everything a really good stir and then put it on medium-high heat until the mixture starts to boil. Once it starts to boil, reduce the heat to a few notches above low and cover the pot with a lid. Set the timer for ten minutes and either make a side dish for dinner or just relax. Nothing to do at that point. (Told you – easy street with this one).

After ten minutes, stir the ingredients really well and then cover again for another 3-6 minutes or until the noodles are tender and mostly all of the liquid has drained out. There may be a tiny bit of liquid left, which is fine because it gets absorbed as you mix in the last ingredients.

Which would be: some more BBQ sauce, up to 1/2 cup or to your taste preference. And lots of shredded cheddar cheese. 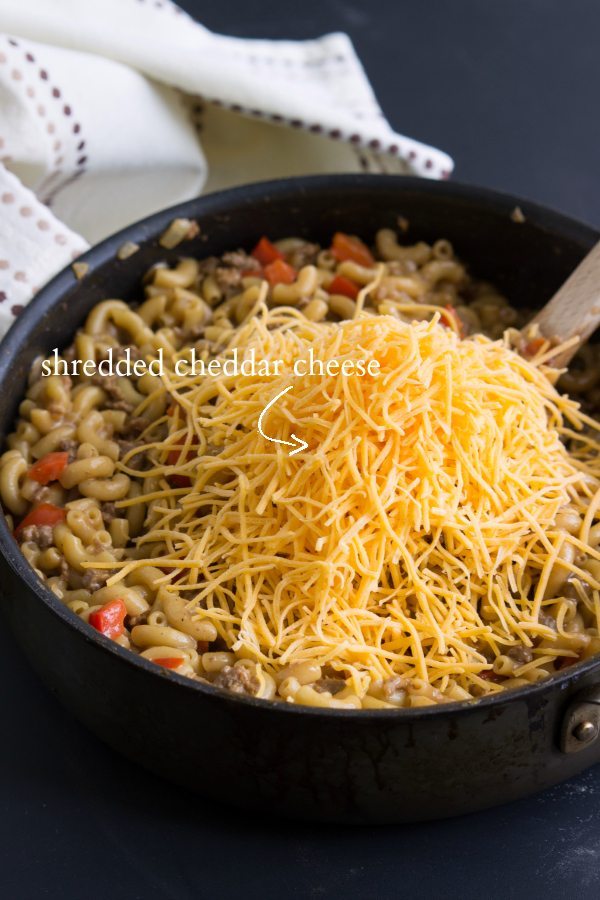 After stirring in the cheese, it practically melts instantly and is so creamy, cheesy good.

Add in some salt and pepper, a few green onions if desired, and serve immediately. Be prepared to have no leftovers left… 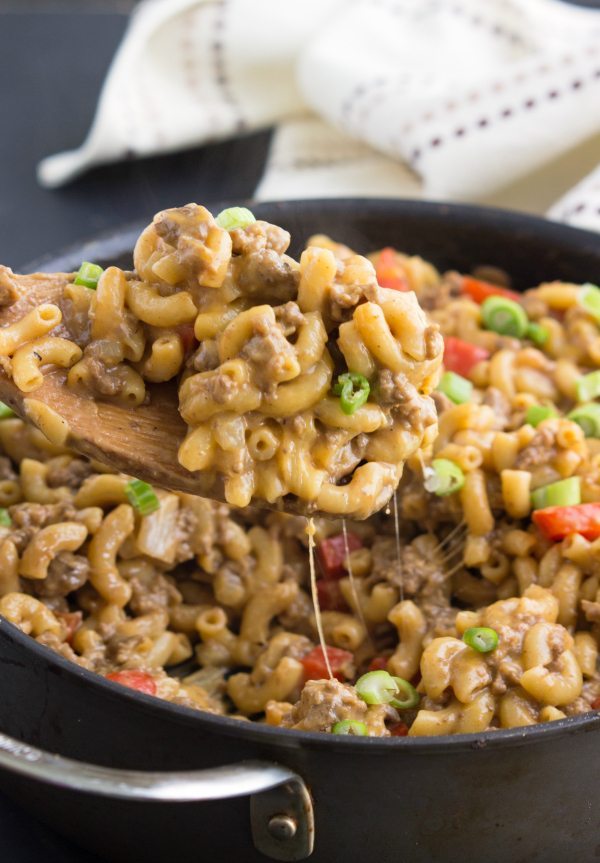 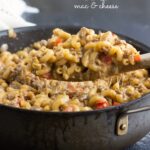