This post features a football-shaped s’mores Snicker’s brownie batter dip. The brownie batter is egg-less and an easy no-bake recipe. Plus some fun football party ideas and some other fun chocolate candy bar recipes.

So it’s a little early, but football season is right around the corner! Are you all excited? I can’t wait! I will, however, admit I am always more excited about the food aspect than the game aspect.

I mean, game food is totally the best. All that junky, make-you-feel sick food while enjoying a game? Love it. Personally my favorite is always a 7-layer dip – give me that dip and a bag of chips and I can seriously do some damage. And if we are talking desserts, I’m all over the dips too.

Fruity dips with lots of fresh fruit or savory cheese dips with chips and veggies – both great. But a chocolate dip with cookies or (in this case) graham crackers — oh yes; that’s the best.

This isn’t any ordinary chocolate dip though. It starts with an egg-less brownie batter (from my no-bake brownie bites), and then gets all s’more-ified. Marshmallow fluff, chopped snickers, and … wait for it … graham cracker dippers!

Except these dippers are the cutest! They are decorated to look goal posts and fan crowds. White chocolate decorates the graham crackers making a goal post sign and then sprinkle jimmies (or you could use nonpareils) to create “fans” in the football field.

Okay, but I’m getting ahead of myself! Back to the actual dip. It’s really easy and can be assembled in minutes. First – the brownie mix + butter gets mixed together. And a little bit of heavy cream to thin it out a bit. Then you let the melted butter cool before mixing in the chocolate candies and marshmallow fluff. Once it’s cooled and those two ingredients are stirred in – it’s time to form the shape of a football. Basically I just kneaded the mixture and formed it into a large ball. Then I flattened it and shaped it with my hands into the shape of the football.

To add even more fun and flavor to the football, I covered it in a chocolate ganache. And then decorated it to make it look like a football with cream cheese frosting. No special piping tools were used; I just used a plastic bag that I cut a hole in the top of!

Yep – even for the goal post “dippers.” I melted white chocolate and poured it in a bag, cut off the top, and then piped it in the shape of a goal post. With the frosting, I coated the other graham crackers and then dunked them in a bowl of sprinkles.

To make this dip festive for a party you can put it on a cake stand and place the dippers all around the football!

Since I’m staying in Utah and visiting family for most of August, we threw a little football party with all the fun desserts. My littlest sister had some of her friends over for the treats and then for some sports playing after. Here’s a sneak peak at the party and the other recipes!

Another one of the recipes we did were Snickers Football cupcakes. These were pretty easy – basically my doctored up cake mix stuffed with snickers and decorated with frosting to look like a football. Feel free to make your own cake and frosting from scratch, but I feature easy recipes on this blog and these cupcakes are certainly easy for a party!

There were some pudding cups – just chocolate pudding put in trifle dishes and garnished with a goal post graham cracker. These were easy and fun to make! To make the pudding cups s’mores inspired, you could easily mix in some miniature marshmallows! 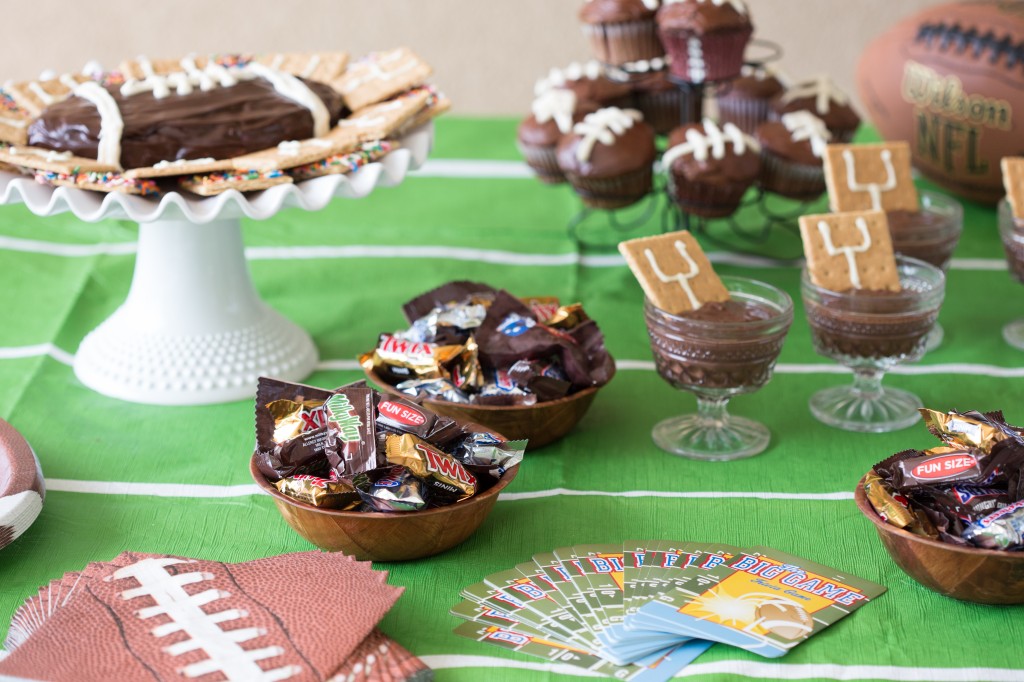 And the final little treat we made were some small snack mixes. I found some cute football decorated cupcake wrappers which I used to hold the snack mix. I don’t have a recipe for these because I didn’t really measure out too much of anything – it was pretty much just mixing a few ingredients together – about 2 cups marshmallows, 1 package graham crackers broken up, a large handful of chocolate chips, and one bag of Snicker’s bites all mixed together and then put in these cupcake wrappers. 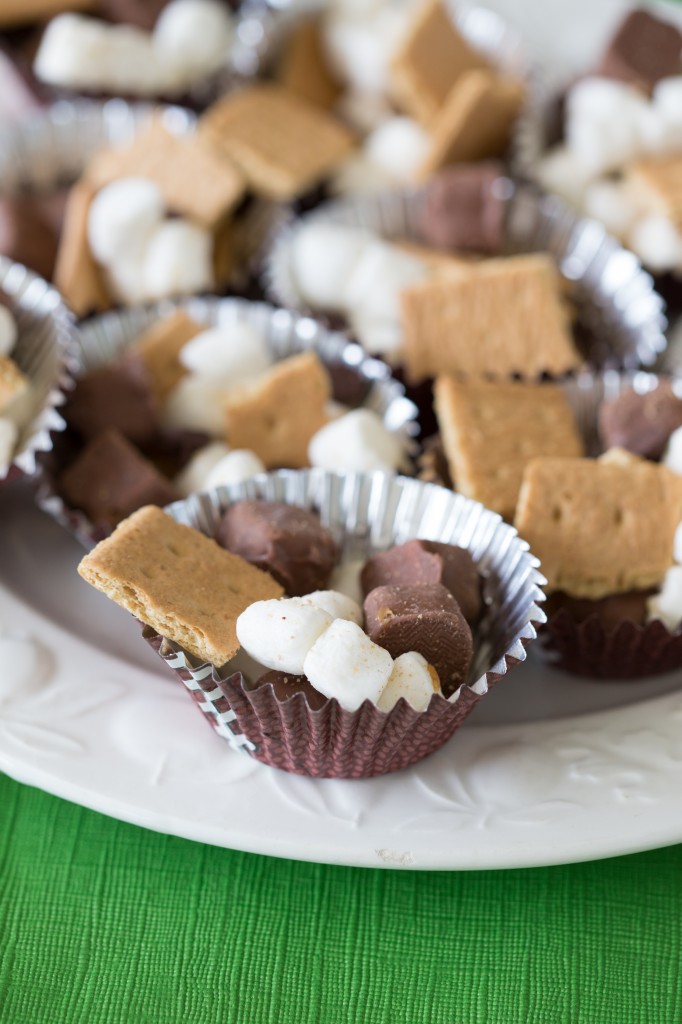